A commitment to quality

As always, we are committed to delivering the highest quality drinking water to all our residents. We have rigorous safeguards in place to make sure that our tap water meets or surpasses all health standards, and we are pleased to announce that our compliance with state and federal drinking water regulations remains exemplary. And that's not all.

Year after year, we have earned international recognition for our award winning tap water. Read about our most recent award, where we ranked among the nation's top 5 best tasting and highest quality on tap. Santa Ana has grabbed the bronze, silver and gold, earning the distinction of producing the nation's best and highest quality tap water in 2014. It's a distinction we are proud to share with the community. In fact, you may have seen our "Award Winning" campaign around town at community events, while waiting for a bus, or wrapped around our community outreach vehicle.

As a Santa Ana resident, you can be assured that your water not only exceeds the drinking water health standards required by both state and federal agencies, it is among the best tasting water on tap! 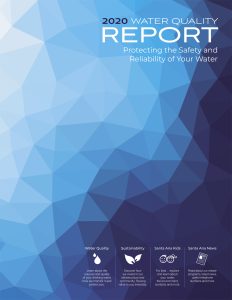 The California Health and Safety Code mandates a report be prepared every three years comparing drinking water quality with Public Health Goals (PHG's) adopted by California Environmental Protection Agency (EPA). A "PHG" is the level of a contaminant in drinking water below which there is no known or expected risk to human health. This Public Health Goal Report is intended to provide information to the public in addition to Annual Water Quality Reports made available to residents.

We are proud that each year Santa Ana complies with all of the health-based drinking water standards and Maximum Contaminant Levels (MCLs) required by the California Department of Public Health and the EPA.

The most common source of lead in tap water is the plumbing in your home. Read the facts. Download a copy of the most recent one in English or Spanish.

What are PFAS, PFOS, and PFOA?

Dating back to the 1940s, Perfluorooctanoic acid (PFOA) and perfluorooctane sulfonate (PFOS) have been commonly used to coat carpets, clothes, furniture, food packaging, cookware and other products. We’ve all encountered PFOA and PFOS in our daily lives. They were popular for their resistance to water, stains and food sticking, which made them particularly useful in cookware. They were also used in fire-fighting foams, cleaning products and industrial uses. PFOA and PFOS are part of a larger group of man-made chemicals referred to as per-and polyfluoroalkyl substances (PFAS).

PFAS are present in many common items that we come in contact with on a regular basis and water is just one of many ways that humans can be exposed to these substances. Santa Ana’s drinking water is safe and meets all quality standards set by both the state and federal government. Click here to learn more.

Does Santa Ana Test For PFAS?

Public health has always been a top priority for the City of Santa Ana. Following the DDW’s initial Notification and Response Levels for PFOA and PFOS, Santa Ana proactively tested for the presence of PFOA and PFOS in August 2018. Santa Ana’s Well 38, located near the Santiago Creek Recharge Basin, had detectable results above the Notification Levels but below the Response Level for PFOA and PFOS. Santa Ana voluntarily stopped serving the water from Well 38 in September 2018 and this well has remained out of service since then.

In March 2019, the California Division of Drinking Water (DDW) issued monitoring orders as part of a statewide phased PFAS Investigation Plan to determine the occurrence and extent of PFAS in California. As part of this statewide plan, the City of Santa Ana is conducting additional monitoring (sampling and testing). Santa Ana has retested its OPA-1 well 3 times. The monitoring results confirmed that Well 38 remains over the Notification Levels for PFOA (9.2 ppt average) and PFOS (13.95 ppt average). Santa Ana, in collaboration with Orange County Water District, is currently evaluating new treatment methods to remove PFOA and PFOS from groundwater.

What is Santa Ana doing to protect our drinking water from PFAS?

Santa Ana’s water is thoroughly treated and tested to ensure it meets some of the highest standards in the world. We watch closely for PFOA and PFOS in our water and will ensure that our city’s water meets or exceeds state and federal regulations. The following is part of our action plan related to PFAS:

Anyone with questions or concerns can contact  Cesar Barrera, Water Resources Manager, City of Santa Ana at (714) 647-3387 or email cbarrera@santa-ana.org.

If you would like to be involved in issues and decisions that affect the quality and cost of your drinking water, City Council meetings are open to the public and held at 5:45 pm on the first and third Tuesday of each month.