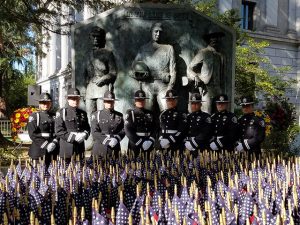 The Honor Guard Detail is the official representative of the Santa Ana Police Department.  The Honor Guard attends the funerals of Southern California police officers who lose their lives in the line of duty, the funerals of retired officers, and annually attends the California Police Memorial Ceremony in Sacramento.  The detail may also be utilized for ceremonies and other special events as designated by the Chief of Police.  The twelve members that comprise the Honor Guard Detail work various assignments within the department such as canine, investigations, patrol, training, and directed patrol.