The mission of the Field Operations Bureau is to ensure the safety and security of all people in Santa Ana. Our mission is accomplished by providing responsive and professional public safety services to the community, utilizing a combination of a problem solving approach in partnership with community members through prevention and traditional, suppression and apprehension strategies. These combined strategies complement one another to eliminate or reduce the impact of entrenched community problems. The Field Operations Bureau, which serves as the field services delivery foundation of the Santa Ana Police Department, is committed to providing the highest level of service with dignity and respect. The men and women of the Field Operations Bureau place themselves in harm's way, potentially each and every day, to keep residents, visitors and businesses safe.

Under operational command of Assistant Chief Rodriguez, the Bureau is organized into four major Divisions:

The Patrol Division is dedicated to providing prompt and exceptional service during times of emergency or crisis to residents and business operators within the city. Patrol conducts the initial investigation of most crimes, addressing quality of life issues and conducting community outreach through numerous Community Oriented Policing initiatives.

The West Policing Division is composed of the West End and Southcoast policing districts, and the East Policing Division is comprised of the Northeast and Southeast policing districts. Both divisions are overseen by a District Commander. The primary purpose of the District Policing model is to address community concerns through a Community Oriented Policing approach where ongoing crime trends, community outreach and quality of life issues are addressed in an efficient and effective manner using resources from throughout the organization as well as collaboration with other government agencies, nonprofits and businesses. District Commanders and their staff attend meetings throughout the community and partner with Neighborhood Watch captains to remain engaged with the public to the greatest degree possible.

The Field Operations Bureau maintains two regional substations in an effort to enhance our Community Oriented Policing and outreach to the community. The Westend Office has forged a long-standing relationship with the community as well as the non-profit Westend COP board . Several events are held throughout the year such as National Night Out and other programs.

There is also a substation at the Regional Transportation Center. In addition, the Santa Ana Law Enforcement and Fire Training Center located in Centennial Park provides training opportunities for the Police Department and our regional public safety partners. The Jose Vargas Community Affairs Office located in City Hall is open five days a week and is staffed with a Spanish-speaking volunteer who is available to answer any questions community members may have. 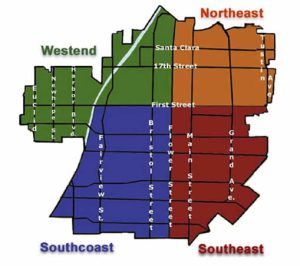 Specialized units are an important part of the Field Operations Bureau. The teams are responsible for community outreach and enforcement efforts.

The Special Enforcement Teams are managed by the Division Commander and include a Directed Enforcement Team for each side of the City, the Civic Center Patrol and the Downtown Liaison Unit.

Over the last few years, Santa Ana’s Downtown has become a vital, fast-growing mixed use of business and entertainment venues. There has been a growth in real estate with the development of Downtown lofts near the Artists Village. Santa Ana’s Mounted Unit works in the Downtown area to provide a visible and more personable interaction with the community.

Other specialized units include Air Support Team, Canine Unit and DUI Enforcement Team out of the Traffic Division. The Police Plan Check office is located in City Hall and is responsible for Crime Prevention programs, special events throughout the City, and working with the State Department of Alcoholic Beverage Control(ABC).

SWAT is a specialized support unit that responds to extremely high-risk incidents posing a tremendous threat to officers and/or citizens. These types of incidents are so hazardous, complex or unusual they typically exceed the capabilities of first responders or investigative units. SWAT is capable of handling acts of terrorism, barricaded suspects, hostage situations, riots, dignitary protection, and high-risk warrant service, as well as the protection of lives and property. Selection to the SWAT team is highly competitive and requires each member maintain a high level of physical fitness, firearms proficiency, and tactical skills. The SWAT Team consists of 35 officers and communication specialists. Included within the SWAT Team is a cell of Crisis Negotiators who receive specialized training in crisis negotiations with barricaded suspects, hostage situations, suicide intervention, and domestic violence intervention.

Canine utilizes police service dogs to supplement front line policing functions.  Police canines are used to find and apprehend violent suspects, providing officers an additional non-lethal resource.  “Rosie”, the Bloodhound can be used to track the scent of missing persons or suspects.  “Shadow”, was the first full-time Therapeutic K-9 in Orange County.  In additional to providing emotional support to members of the department, she has also been utilized for the interview of juvenile victims of violent crimes and community engagement events.

Two of the five teams are also trained in the detection of narcotics. This training enables them to assist patrol and narcotics officers, as well as outside law enforcement agencies, in locating illegal drugs.

The canine unit trains their dogs at a variety of locations throughout the City of Santa Ana, including the Wheeler Canine Training Center at Santiago Park. This facility has given the canine officers a facility unlike any other in Southern California.

The canine unit is always in need of a building to use to simulate real life searches for the dogs. Local business owners often open their shops and warehouses for this purpose. The canine officers are extremely grateful for this continuing partnership with the business community.

The Santa Ana Police Department partners with the Orange County Sheriff’s Department in providing Airborne Law Enforcement to the city of Santa Ana. The department provides one full-time pilot to the air support unit. The helicopter, named “Duke” responds to thousands of calls for service each year in Santa Ana, providing ground officers with valuable tactical information. Each year the helicopter crews assist with hundreds of arrests, pursuits and crimes in progress. Many suspects would not be captured without the assistance of the helicopter. “Duke” is equipped with the latest technology, such as, HD infrared and video cameras, moving maps, DVD recorders and high powered lighting equipment.

The Santa Ana Police Department Mounted Unit Enforcement Detail was created in 1990 as a volunteer unit. It is now comprised of 11 sworn members and one civilian volunteer. The officers attend the 40 Hour Mounted Enforcement School, provide their own horse, and trains together once a month.

The Mounted Unit may be deployed whenever large groups have gathered for special events for crowd management. The unit is also a valuable resource for high-profile crime suppression in targeted areas, such as city parks and large shopping centers.

Since the 1970s, we have incorporated the Community Oriented Policing philosophy as part of our traditions and principles to reduce crime. Learn more on our Community Engagement webpage.

The Traffic Division’s responsibility is to provide professional traffic safety services within the City of Santa Ana.  These efforts are accomplished through education, technology and enforcement.  Problem solving will include the community to address traffic concerns. Learn more on our Traffic Division webpage.