Juneteenth is the oldest known annual observance commemorating the abolishment of slavery in the United States of America. Check out these valuable resources available at the Santa Ana Public Library. 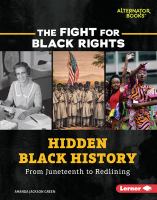 A behind-the-headlines look at the continuing fight for Black rights and representation.

The essential, sweeping story of Juneteenth's integral importance to American history, as told by a Pulitzer Prize-winning historian and Texas native.

The Black Agenda: Bold Solutions for a Broken System

From ongoing reports of police brutality to the disproportionate impact COVID-19 has had on Black Americans, 2020 brought a renewed awareness to the deep-rootedness of racism and white supremacy in every facet of American life.

Edited by Anna Gifty Opoku-Agyeman, The Black Agenda is the first book of its kind--a bold and urgent move towards social justice through a profound collection of essays featuring Black scholars and experts across economics, education, health, climate, and technology. It speaks to the question What's next for America? on the subjects of policy-making, mental health, artificial intelligence, climate movement, the future of work, the LGBTQ community, the criminal legal system, and much more.

This Is the Fire: What I Say to My Friends About Racism

The host of CNN Tonight with Don Lemon is more popular than ever. As America's only Black prime-time anchor, Lemon and his daily monologues on racism and antiracism, on the failures of the Trump administration and of so many of our leaders, and on America's systemic flaws speak for his millions of fans. Now, in an urgent, deeply personal, riveting plea, he shows us all how deep our problems lie, and what we can do to begin to fix them.

Beginning with a letter to one of his Black nephews, he proceeds with reporting and reflections on his slave ancestors, his upbringing in the shadows of segregation, and his adult confrontations with politicians, activists, and scholars. In doing so, Lemon offers a searing and poetic ultimatum to America. He visits the slave port where a direct ancestor was shackled and shipped to America. He recalls a slave uprising in Louisiana, just a few miles from his birthplace. And he takes us to the heart of the 2020 protests in New York City. As he writes to his young nephew: We must resist racism every single day. We must resist it with love.

The little-known and under-studied 1807 Insurrection Act was passed to give the president the ability to deploy federal military forces to fend off lawlessness and rebellion, but it soon became much more than the sum of its parts. Its power is integrally linked to the perceived threat of black American equity in what lawyer and critic Hawa Allan demonstrates is a dangerous paradox. While the Act was initially used to repress rebellion against slavery, during Reconstruction it was invoked by President Grant to quell white-supremacist uprisings in the South. During the civil rights movement, it enabled the protection of black students who attended previously segregated educational institutions. Most recently, the Insurrection Act has been the vehicle for presidents to call upon federal troops to suppress so-called "race riots" like those in Los Angeles in 1992, and for them to threaten to do so in other cases of racial justice activism. Yet when the US Capitol was stormed in January 2021, the impulse to restore law and order and counter insurrectionary threats to the republic lay dormant.

While the world may know the major names of the Civil Rights movement, there are countless lesser-known heroes fighting the good fight to advance equal justice for all, heeding the call when no one else was listening, often risking their lives and livelihoods in the process.

Righteous Troublemakers shines a light on everyday people called to do extraordinary things--like Pauli Murray, whose early work informed Thurgood Marshall's legal argument for Brown v. Board of Education, Claudette Colvin, who refused to give up her seat on a segregated bus months before Rosa Parks did the same, and Gwen Carr, whose private pain in losing her son Eric Garner stoked her public activism against police brutality. Sharpton also illuminates the lives of more widely known individuals, revealing overlooked details, historical connections, and a perspective informed by years of working on the front line of the social justice movement, to provide a behind-the-scenes look at the wheels of justice and the individuals who have helped advance its cause.

A riveting biography of Walter White, a little-known Black civil rights leader who passed for white in order to investigate racist murders, help put the NAACP on the map, and change the racial identity of America forever.

For players, fans, managers, and executives, Jackie Robinson remains baseball's singular figure, the person who most profoundly extended, and continues to extend, the reach of the game. Beyond Ruth. Beyond Clemente. Beyond Aaron. Beyond the heroes of today. Now, a half-century since Robinson's death, letters come to his widow, Rachel, by the score. But Robinson's impact extended far beyond baseball: he opened the door for Black Americans to participate in other sports, and was a national figure who spoke and wrote eloquently about inequality.

Free Movies and Documentaries on Kanopy

Sign into Kanopy with your library card for free access. Don’t have a library card? Get one today.

RALPH ELLISON: AN AMERICAN JOURNEY is the first documentary on one of the most gifted and intellectually provocative authors of modern American literature. It establishes Ellison as a central figure in contemporary debates over art, politics, race and nationhood. Narrated by Andre Braugher, the film brilliantly presents the first scenes ever filmed from Ellison's landmark novel, Invisible Man.

A four-night, eight-hour event series, "ROOTS" is a historical portrait of one family's journey through American slavery and their will to survive and preserve their legacy in the face of unimaginable hardship.

REPARATIONS explores the four-century struggle to seek repair and atonement for slavery in the United States. Black and Asian Americans reflect on the legacy of slavery, the inequities that persists, and the critical role that solidarity between communities has in acknowledging and addressing systemic racism in America.

This story is told by Black and Asian Americans who believe that our collective liberation can only be achieved by standing with one another. Reparations seeks to raise awareness of the Black reparations struggle and how vital it is to healing this country.

Vividly bringing to life the epic struggles of the men and women who fought to end slavery, THE ABOLITIONISTS tells the intertwined stories of Frederick Douglass, William Lloyd Garrison, Angelina Grimké, Harriet Beecher Stowe and John Brown. Fighting body and soul, they led the most important civil rights crusade in American history. What began as a pacifist movement became a fiery and furious struggle that forever changed the nation. Black and white, Northerners and Southerners, poor and wealthy, these passionate anti-slavery activists tore the nation apart in order to form a more perfect union. The series, which tells the story largely through period drama narrative, airs 150 years after the Emancipation Proclamation took effect in January 1863.

The Long Shadow: How Slavery Continues to Impact American Society

When two daughters of the South, Director Frances Causey and Producer Sally Holst, set out to find causes for the continuing racial divisions in the United States, they discovered that the politics of slavery didn’t end after the Civil War.

In an astonishingly candid look at the history of anti-black racism in the United States, THE LONG SHADOW traces the blunt imposition of white privilege and its ultimate manifestation-slavery. Causey and Holst conclude that, without a doubt, artifacts of slavery remain at work in American society today.

THE CIVIL WAR, is an epic nine-episode series by the award-winning documentary filmmaker Ken Burns. The film is a comprehensive and definitive history of the American Civil War, and the recipient of 40 major film and television awards, including two Emmys and two Grammys.

THE CIVIL WAR was five years in the making. The film vividly embraces the entire sweep of the war: the complex causes and lasting effects of America's greatest and most moving calamity, the battles and the homefronts, the generals and the private soldiers, the anguish of death in battle and the grief of families at home.

In 1860, the nation founded upon an idea that all men are created equal and endowed by their creator with the inalienable rights of life, liberty, and the pursuit of happiness had as many as four hundred thousand slave-owners and almost four million slaves.

By denying these rights to more than twelve percent of its population, America would soon pay with the blood of a generation.

The story of African Slavery in America started with the first permanent English Colony in the 17th century… and ended with the Civil War. But those two hundred and fifty years of struggle were just the beginning. The beginning of a journey down the long Emancipation Road…

Recorded in 1940, former slave Billy McCrea remembers the social conditions and punishments he observed as a “big boy” (approximately 13) living during the time of slavery.  He also recalls receiving news of his freedom alongside his mother.

Harriet Smith speaks of her of witnessing “the break up” of slavery at 13 years of age.  She describes herself and other slave youths sitting atop fences watching soldiers and their horses march south on their way to San Antonio. She recalls one of her friends, an orphaned and injured slave girl from another household, willingly depart behind the soldiers, never to be seen again. She also recounts her family’s decision to stay and continue working and living on the plantation until they bought a home and formed “colored” colony several years later.

Former slave Laura Smalley recalls the hardship slave children lived during slavery and remembers her own reception to the news that slavery had ended. Though she does not remember the Civil War she recalls her master returning from war and withholding the news from the slaves in the plantation for another six months. She also recalls the uncertainty and hopelessness in not having anywhere to go that prevented former slaves from leaving the plantation. In another segment of the interview (part 4 of 5) she recalls being provided with an abundant meal marking her freedom, but not understanding its significance.