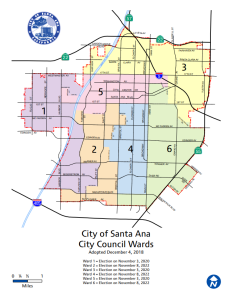 The City Charter requires that Ward boundaries be of equal population and that the City Council hold at least one (1) public hearing to consider modifying those boundaries. The City will hold four (4) public hearings to consider ward boundaries over the next several months. The first two hearings are critical in that they will explain the re-boundary process, review the criteria used to modify Ward boundaries, and allow residents to submit their ideas for potential boundary lines. These two hearings will culminate in the development of proposed new Ward map(s). The remainder of the hearings will be to consider the proposed map(s), select the preferred map, and adopt the final new Ward map. The Public Hearing schedule is as follows:
Two (2) Public Hearings to review the Ward re-boundary process, hear from residents about their ideas for potential ward boundaries, and to receive City Council direction on the criteria to be considered for mapping of new Ward boundaries, were held:

Two (2) Public Hearings to seek resident input on the content of the draft Ward map(s) and sequence of elections, select a preferred Ward map, and to introduce an ordinance for adoption, will be held:

For transparency and to encourage community participation, the City is providing information about the Ward re-boundary process on the City’s website and has set up a dedicated phone line in which residents may contact at (714) 647-6520, ext. 2520.

How To Make Comments - Copy of map(s) to be considered by the City Council will be posted on this site, as they become available. If you do not wish to appear at the public hearing, you may also send your written comments to the Clerk of the Council, by mail to City of Santa Ana, 20 Civic Center Plaza – M30, Santa Ana, CA 92701 or via e-mail at ecomment@santa-ana.org

Where To Get More Information - All staff reports for City Council consideration are available for public inspection in the Clerk of the Council Office during regular business hours and posted on the City’s website the Friday before a Council meeting takes place at: http://santa-ana.org/city-meetings.