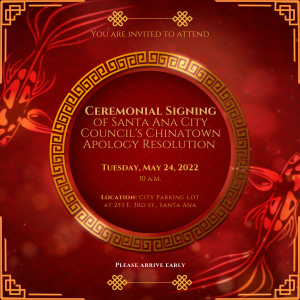 Members of the public are invited to a ceremonial signing of the City Council’s resolution apologizing for the burning of Santa Ana’s Chinatown in 1906. The event will take place at 10 a.m. on Tuesday, May 24, 2022, at 253 E. 3rd St. (City parking lot across from the original Chinatown site.) On May 17, the City Council unanimously approved a resolution apologizing to Chinese immigrants and their descendants for acts of fundamental injustice and discrimination, seeking forgiveness and committing to the rectification of past policies and misdeeds.

In 1906, the City of Santa Ana Board of Trustees (now the City Council) made plans to remove Chinese residents and merchants in Santa Ana’s Chinatown as part of an urban renewal effort to gain control of those properties for the building of a new City Hall. On May 25, 1906, the Board of Health of the City of Santa Ana passed a resolution and issued an order to the fire marshal to deliberately set fire to Chinatown.

That day, a mass rally of 1,000 citizens gathered to watch and celebrate as the area known as Chinatown between Main and Bush streets south of 3rd Street was burned to the ground. This led to the destruction of homes and businesses and the displacement of Santa Ana’s Chinese community. Despite the many contributions of Chinese immigrants and their descendants as well as their long and rich history in the United States, for many decades they faced virulent racism and xenophobia at local, state and national levels.